skip to main | skip to sidebar

Posted by Tarkeshwar at 4:33 AM No comments:

Maharashtra has a glorious history. It is a holy land of saints, sages and social reformers. Peasants and workers have toiled for centuries to make Maharashtra the Prime State of India.
The State is spread over an area of 308,000 square kilometres. It is divided into six administrative divisions and 35 districts. Mumbai, the capital of the State, is also the Financial Capital of India.
According to the World Bank Survey, Maharashtra has the most favourable atmosphere among the States in the country, for industrial investment, domestic and foreign. This was endorsed at an Infrastructure Conference held in Mumbai in November 2002 once again. No wonder, Maharashtra has been leading the list of all the States as far as the investment flow is concerned and is poised to guide the country in the infrastructure development sector.
To keep up with the modern transformations around the globe, Maharashtra has achieved the leading position amongst all other States in the field of Information Technology and occupies numero-uno position in the country in setting up IT Parks and in adopting a Bio-Tech Policy in a determined bid to compete with other countries of the world.
It was in Ahmednagar district of Maharashtra that the first cooperative sugar factory in Asia was established. Employment Guarantee Scheme, popularly known as EGS, has been providing employment to the weaker sections of society in times of distress for the past three decades. The genesis of this revolutionary concept can be found in Maharashtra’s rich cultural and social heritage. A similar scheme, launched by the Government of India, is based on EGS.
Maharashtra also ushered the road construction industry in India into the 21st century. The Mumbai-Pune Expressway is the testimony of this achievement. This is the first superway in the country on which vehicles can ply safely at 100 km and the concept is now replicated all over India.
The State has achieved remarkable progress in administrative reforms. The law and order situation in the State is the best in the country. Setting up of maiden Cyber Crime Cell in Western India has added another feather in its cap of police force. Maharashtra has earned the distinction of implementing the Western practice of Tourism Police for the first time in the country.
This is the land, which gave birth to father of Indian film industry, Shri Dadasaheb Phalke. Just a few years ago, Dr. Vijay Bhatkar made the whole world sit up and take Maharashtra’s notice by producing PARAM super computer within minimum time and funds. Cricket lovers across the world are mesmerised by the scintillating batting of Sachin Tendulkar, who is a quintessential Mumbai product. Ashutosh Gowarikar, nominated for Oscar by Hollywood, learnt the film craft in Mumbai.
Marathi stage and its path-breaking drama production, nearly 500 Diwali Special Numbers to salute Marathi every year and Ganpati festival, the largest public celebration in the world, are only a few distinctive features of the State.
Mango, orange, grape or pomegranate produced in the State have been adorning shelfs in the department stores across the world for years. Moreover, a food and agro-produce processing industry is developing in various corners of the State now. Maharashtra’s performance in diverse fields like arts, sports, culture, literature, social and administrative reforms as well as academics research, defence and agriculture has left its unique mark in India. Its many great personalities reached the pinnacles of achievements in the respective fields of activity. The social reforms movement in the State began over 150 years ago. It has been the source of inspiration for the country. Maharashtra is known for bravery of its people who blend it with tolerance. The socially amicable atmosphere in Maharashtra surprises people from other states of India for these reasons.
MAHARASHTRA
1. Districts : 35
2. Area : 308,000 sq. kms.
3. Sub-Divisions : 109
4. Talukas : 353
5. Municipal Corporations : 19
6. Municipal Councils : 224
7. Zilla Parishads : 33
8. Panchayat Samitis : 349
9. Gram Panchayats : 27832
(Including Nagar Panchayats)
10. Means of Transport : Roads- 2,16,968 kms.
NH-3710
SH-32586
Main District Roads-45543
Other Roads -43511
Rural Roads -91618
Railways-5459 kms.
Broad gauge -4153
Meter gauge -300
Narrow gauge -806
Ports –50
Main Ports -2
Small Ports -48
Others
Post Offices -12788
Rural-11394
Urban-1394
Telephones - 54.58 lakh
Internet Connections-3,50,000
(NH= National Highway)
(SH= State Highway)

Climate.
The Khandesh seasons are the rainy months from the middle of June to the middle of October, the cold months from the middle of October to the middle of February, and the hot months from the middle of February to the middle of June. From variety of height, position, and character, the climate varies greatly in different parts of the district. In the,western hills and forests, the rainfall from the south-west monsoon is heavy, and in the Satpudas the supply is also considerable. But over much of the centre and south the fall is scanty and uncertain, and in few seasons it is in all parts sufficient. Throughout Khandesh it is less than in the Southern Maratha Country, and little if at all greater than in the Deccan. Dhulia, removed from the extremes of scarce and of abundant rainfall, had, during the twenty-nine years ending 1879, an average supply of 21.78 inches, the amount varying from 10.94 in 1871 to 35.92 in 1878. The following table gives, the yearly returns:
Jalgon District
Enveloping a total area of 11, 765 sq km, the Jalgaon district is found on the north-western belt of Maharashtra. The total population of the district is 36, 79, 936 and there are 932 females per 1000 male in the place (2001 census). Jalgaon has a stable agricultural economy that includes millet, banana, cotton, sugarcane, wheat, lime and groundnut as the key crops. Apart from 3303 Small Scale Industries and sixty three large scale companies, the place houses cement, silk, sugar, petroleum and coal product factories as well. The special appeal of Jalgaon ranges from Atrayal, Chorwad, Changdev to Padmalaya, Patnadevi and Amalner.
JALGAON
Jalgaon district is known for its advances in horticulture. Its production of bananas and cotton, especially by resorting to drip irrigation, has created a role model for cultivators in other parts of India. Bananas grown in the district are exported outside the State and to other countries. Mehrun village is famous for its unique bor (jubjube). Amalner is regarded as Pandharpur of Khandesh. Centuries ago, Sant Muktabai’s stay in the district has made it a holy place since. In present times, legendary poetess Bahinabai Chaudhari of Jalgaon spread the fame of the Ahirani dialect across the seven seas. Sane Guruji awakened the labour class while Balkavi Thomre’s poetry enriched socio-cultural life of the district.

19. Educational Institutions
Universities-1
Colleges-54
Prim. Schools - 2057
Sec. Schools - 517
------------------------------------- xxx -------------------------------------
Nandurbar District
The Nandurbar district of Maharashtra holds a total area of 5034 sq km. The place accommodates 13, 09, 135 no. of people out of which 6, 10, 389 no. of people have access to literacy programmes. Blessed with high agricultural production, the lands of the district are utilized to grow rice, jowar, wheat, sugarcane, groundnuts, cotton, toor, among others. Two shipping mills and three sugar factories of Nandurbar provide occupation to most of the inhabitants. Sidheswar temple, sculpture of Mahavir, Dattatreya temple, Pandava Leni, Toranmal Shiv temple, Prakasha Dakshin Kashi, Hidimba's forest, Horaphali waterfall, Upandev, Narayanpur and Padalpur dominates the tourism landscape of Nandurbar.
NANDURBAR
A predominantly tribal pocket, which has been socially and politically alert, Nandurbar district has become internationally known for the first project of manufacturing particle boards from sugarcane baggasse in the world. Nandurbar is identified with Shirish Kumar, who scarified his life at a tender age during the freedom struggle. His Memorial is like a place of pilgrimage for many. Important crops of this district are chillies, cotton, sugarcane and tur. Almost 62 per cent population of this district is tribal. Adivasi Pawara dance and Songadya Party are its distinguished socio--cultural features. Toranmal hill station attracts tourists round the year.

DHULE
Dhule district in general and the town in particular had been famous for its pure milk. Milch cattle used to be fed with cotton pend (cattlefeed made by using cotton extract), which would produce rich quality milk. Customers in Delhi once upon a time used to wait for the delivery of milk from Dhule. Dondaicha in this district is the only town in the State to produce glucose sugar and other products from maize. Laling fort, Tirupati Balaji temple of Shirpur, Nakane Pond, Rajwade Sanshodhan Mandir are places of tourists interest. Dhule district has been known for cash crops like, cotton and chillies. 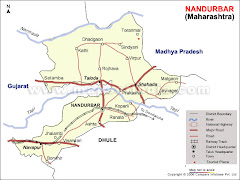 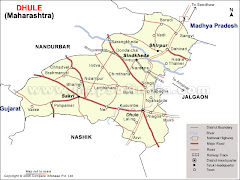 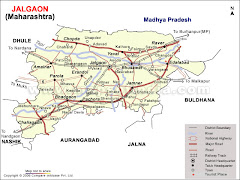